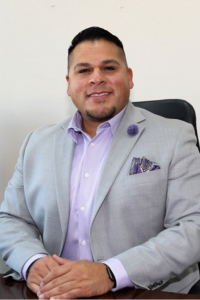 As an educator for 18 years, Mr. Ernie Espino began his teaching career in 2005 as a 4th/5th-grade bilingual teacher in Garland ISD.  After being a classroom teacher for 6 years he decided to take on administrative roles after completing his master’s degree in educational leadership in 2011.

His administrative career began in 2011, serving as an instructional specialist.  In 2012 he accepted a position as the Bilingual/ESL Coordinator for the Tyler ISD.  He later accepted his first campus leadership role as an assistant principal at Carver Elementary School in Garland ISD.  Shortly after he transitioned over to the secondary level as assistant principal of Naaman Forest High School.  In 2016 Mr. Espino was promoted and opened Weaver Elementary ~ Mandarin Chinese and Leadership Magnet School as the campus principal.  Most recently, Mr. Espino has served as the principal of the Universal American School in Kuwait.

In addition to the aforementioned, some of his finer qualities include a niche for restoring campus cultures, educational innovation, and establishing 21st-century learning environments. Aside from having and communicating high expectations for academic success, he also lets his staff members know the equal importance of establishing an atmosphere of trust, collaboration, rapport, and mutual respect.

Furthermore, he prides himself on creating a sense of “community” while also providing parents with appropriate levels of engagement within the academic environment.   He always leads by example and serves as a role model for his staff and students. His favorite quote, “When you surround yourself with great people, great things happen”!